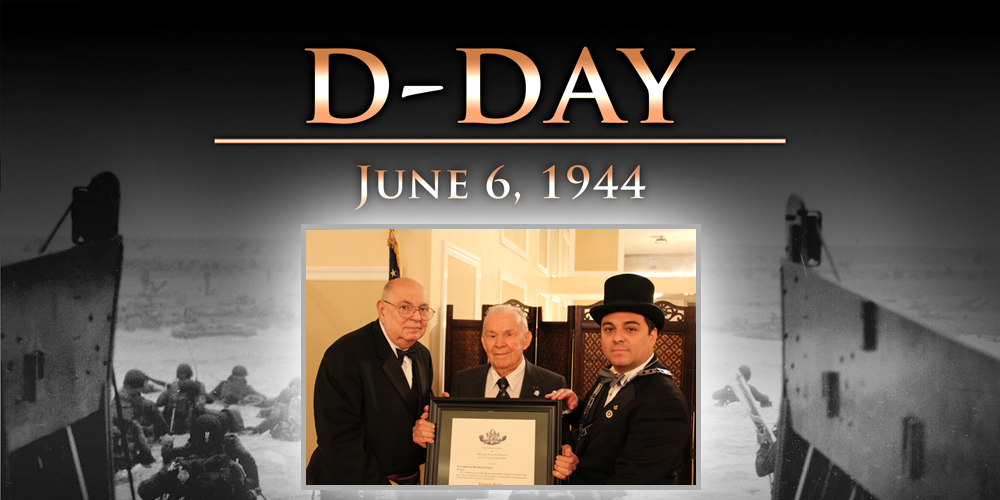 Today we had the distinct pleasure of having one of our own brothers recognized for his valor during the DDay invasions. His son, Dr. Lawrence F. Jindra presented a wonderful speech about his father which is transcribed below:

On June 6, 1944, the Americans and our Allies stormed the beaches and fields of Normandy with 150,000 Soldiers, 5,000 ships, and 11,000 aircraft in a titanic battle to breach Hitler’s fortified Atlantic Wall. It was the largest invasion in world history. The forces of democracy and freedom were in a fight to the finish against powerful totalitarian regimes and their ideologies. The invasion drew upon all the physical, spiritual, material, and human resources of our nation. Americans overcame daunting odds as they fought their way across Utah and Omaha beaches. They changed the course of the deadly world struggle there, setting the stage for the ultimate defeat of Nazi Germany – and, four months later, the defeat of our other enemy, the Japanese.

On June 6, 2014, we honor SSgt and Brother, Leonard Jindra who emigrated legally to the USA before WWII. Fulfilling a promise made to his Mother, he enlisted in the US Army after undergoing voluntary surgery to change his status from 4F to A1. SSgt Jindra served as a rifleman and infantryman with the 29th Division, depicted in the movie Saving Private Ryan, landing on Omaha Beach in the second half of the first wave, in the early morning hours of DDay. He sustained numerous injuries and was medically evacuated with near mortal wounds after 56 consecutive days in combat. Upon his convalescence, SSgt Jindra volunteered to serve as a spy, traveling behind enemy lines to obtain information for the allies. After his service records were destroyed and lost by the US Army, he successfully received his promotion to his present rank in 2010, 66 years after the fact, at the Union League Club. SSgt Jindra was recently awarded the French Legion of Honor by the Republic of France and the Cross of Merit by his Native Czech Republic. On June 15, 2014, he will celebrate his 93rd birthday.